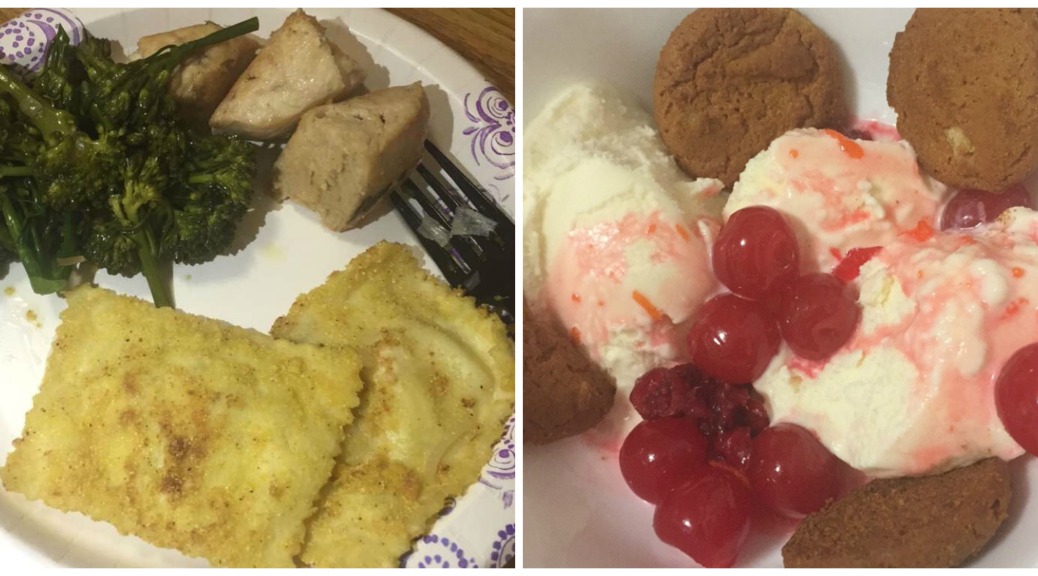 Happy Easter! I was super excited for Easter this year, solely because I knew I’d be making one of Rachael Ray’s wonderful recipes. Well, more than one since this week it was a full meal, complete with dessert! Turkey Cutlets with Rosemary and Cornmeal-Dusted Ravioli, Broccoli Rabe with Golden Raisins, and Warm Cherry, Orange, and Cranberry Compote with Vanilla Ice Cream. I knew my friends and I were going to be having a great Easter feast.

I just got back from spring break in California at 8 AM Saturday morning, so before I went to the grocery store I needed to catch up on some sleep. I headed to Trader Joe’s thinking that the place would be a madhouse, but was pleasantly surprised because I had never seen the place so calm! Don’t get me wrong, there was still a ton of people, but not as many as there usually are. I was able to find just about every ingredient which made this shopping trip even better. I headed to Fairway for the last three ingredients and ended my food shopping day on a happy note.

Fast forward to today, Sunday. All of my friends arrived back at school safely, and we knew we had to have family dinner to catch up on all of our shenanigans from over spring break. Like usual, my sous-chef, Nicolette, came over and we got to cooking for everyone.

We started out with the raviolis. My stove takes forever to boil water so that already set us back like 20 minutes. When the raviolis were finally done cooking, we dusted them with a cornmeal mix and fried them up. They smelled and looked absolutely delicious.

Next, I put the broccoli on to cook. I thought raisins were odd to pair with broccoli, but I didn’t doubt Rachael Ray. This was by far the easiest thing to cook out of everything today.

Onto the turkey. This wasn’t too complicated to make but the cutlets were so thick that they took forever to cook completely through. The turkey was topped off with lemon-wine sauce, also. I wonder why all of the sauces in this recipe book are so watery, I wish they were thicker. Oh well.

Once everything was finished, River came over to help us carry everything downstairs to Purple Ashley’s room. Nicolette, Ashley, Morgan, Purple Ashley, River, and I all dug in. Well….both Ashley’s couldn’t really dig in that much since they’re vegetarians…oops. I also forgot to tell them that the broccoli was cooked in chicken broth. Go me.

Everything was alright, but nothing extraordinary. The turkey was kind of dry, but I really liked the broccoli and raviolis. It was actually the first time I’ve ever had ravioli. Why had I never had ravioli before? I don’t know, but man, was I missing out. We all ate and filled each other in on all of the gossip from spring break. That was definitely the best way to end our break.

After we ate, I grabbed everything for the dessert. The compote was so easy thing to make, and smelled heavenly. I scooped everyone out some vanilla ice cream, drizzled the compote on, and garnished each bowl with some ginger snap cookies. The ginger snaps must have been on steroids because they were super spicy. Our faces when we bit into them were priceless!

Now comes the tough part: rating the food. I’d give the Turkey Cutlets with Rosemary ♥♥ (2) hearts because there was nothing special about it. It was alright, but definitely not my favorite. The Cornmeal-Dusted Raviolis receives ♥♥♥♥ (4) hearts because not only were they delicious, but they sparked a new found love of raviolis for me. The Broccoli Rabe with Golden Raisins gets ♥♥♥ (3) hearts. The raisins added a nice, sweet touch to the broccoli, and altogether this was a nice side dish. Finally the Warm Cherry, Orange, and Cranberry Compote with Vanilla Ice Cream gets ♥♥♥ (3) hearts. Not to shabby for my first dessert, but I think there will be better ones. I’m so glad that this meal was on Easter. It was the icing on top of a wonderful day and spring break. I can’t wait for so many more recipes and holidays with friends to come!