It has been a crazy ride in New York with this blog — From my love/hate relationship with Trader Joe’s to masterpiece and failure recipes, this blog and my love for cooking have flourished in this city. But now, it’s time to take EVOO international!! For those of you who don’t know, I moved to Florence, Italy for a year, but I knew I couldn’t leave EVOO or my faithful readers behind. I packed up the cookbook, and safely made it to Europe. After settling down (and eating more pasta than I’d like to admit) I finally made the time to continue this cooking adventure in my new apartment. On tap for tonight’s first Italian EVOO is Aldo’s Cold Herb-Roasted Chicken and Blanched Green Beans with Parsley. Let’s get cooking!

This adventure is sort of confusing and all over the place because 1. I don’t know how to get around the city yet and 2. all the food labels here are in Italian. It’s going to take some time to get used to grocery shopping here. I first tried this marketplace called Vivi, and I was honestly petrified when I went inside. It was small, dingy, and I felt like there was no way the place would pass US department of health standards. The owner’s toddler was also riding around the tiny store on his tricycle, and bumped into me a few times. I left there empty handed but I knew it was for the best.

The next place I tried actually felt like an American supermarket. Stepping into Conad was somewhat relaxing — I knew it was clean and I knew this would become my regular grocery store. It was pretty easy to find all of the ingredients (considering all I needed was a chicken, green beans and parsley), but the way you buy the produce was slightly confusing.

Europeans are so much more trusting in the grocery store. To buy produce you put as much of one item in the bag as you want — in my case green beans — then you weigh it, and the scale prints out a price sticker according to weight. A pretty easy process, but anyone could put more in after they print the sticker….grocery stores in the USA are definitely not that trusting.

I didn’t cook until the next day (today). A majority of my room mates almost convinced me to go out to eat for the 5th night in a row, but I held my ground and stayed behind to cook instead. Rachael Ray warned in the recipe that it would take over 30 minutes — finally something she was honest about. Although cooking time was longer, it was honestly the easiest recipe in the history of this blog. All I had to do was rub my chicken with herbes de Provence, and then let it cook in the oven for 40 minutes.

I ran out while it was cooking (don’t worry, one of my room mates was home to watch it) to buy some tupper ware. When I returned the chicken was supposedly done, but when I cut it open it was still a little pink so it went back in the oven for another 20 while I made the green beans.

Now the recipe says that both of these items should be served cold….but ain’t nobody got time to let a full roasted chicken cool to room temperature (and why would you want to eat cold chicken) so I ate both of these hot. I’m sure that it was 100% better than it would’be been cold. Sorry, Rachael Ray. 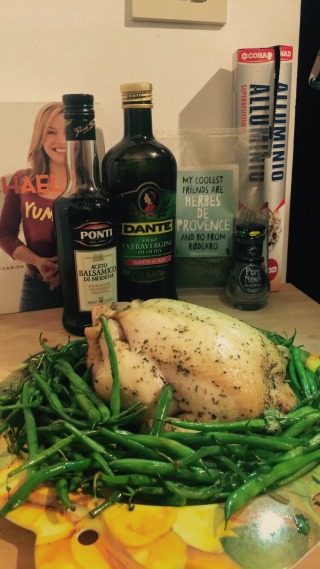 I was starved, so when this moment of truth finally came around I was so happy. 3..2..1… I was so hungry that this meal was better than I thought it would be. You all know I’m not a fan of green beans, in fact I’m allergic to them… but these were stomach-able. I gladly scarfed them down. The chicken was cooked beautifully too. I don’t care what anyone says, the skin is the BEST part! The whole bird was juicy and delicious. I could’ve eaten the whole thing but stopped myself and only ate half instead. Not too shabby for my first home cooked meal in another country.

Now time for ratings. Aldo’s Cold Herb-Roasted Chicken receives ♥♥♥♥ (4) hearts. I loved this chicken. It had a simple spice yet was so flavorful and cooked to perfection. The only thing that prevented it from receiving 5 hearts was that I never realized how difficult it was to eat a full chicken off the bone. I felt like a savage while eating and wasn’t sure if I got all the meat or not, which was kind of frustrating honestly. The Blanched Green Beans with Parsley also receives ♥♥♥♥ (4) hearts. I hate green beans, but this dish was more than tolerable for me. I will never LOVE green beans, but at least I didn’t hate them. I definitely can and will eat these for leftovers the rest of the week.

Cooking in a different country is oddly different, not just because of the shopping, but also having to learn how all of the appliances work. Though this cooking adventure didn’t require much work, I look forward to becoming more comfortable with this culture and my kitchen. Hopefully Rachael Ray will bless this next year with lots of Italian recipes to come. I’m ready to become a master *Italian* chef! Here’s to the next year of new food and new adventures! Ciao!