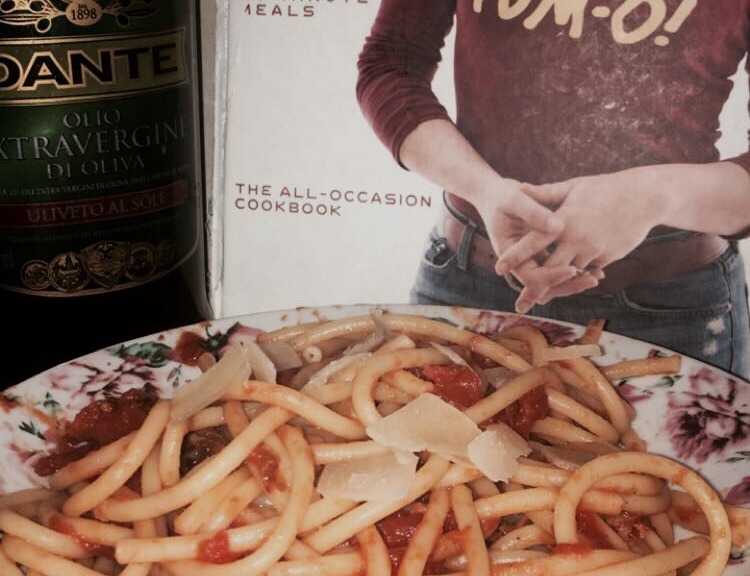 I have honestly been pretty bored lately….well, really just this weekend since all of my friends went to France, and I decided to stay home. (Don’t ask me why, it was a lame choice on my part). But, what’s the perfect way to cure boredom? Cooking of course! Today’s menu is another scrumptious sounding pasta dish: Bucatini all’Amatriciana. Let’s get cooking!

As I stated above, all my friends went to the French Riviera this weekend leaving me alone to sit around and be a vegetable. Friday I watched the whole first season of Sex and the City, so on Saturday I decided to be a little productive with my life. I got my lazy butt up to go to the grocery store. I only needed to pick up 4 things: crushed red pepper, crushed tomatoes, bucatini (hollow spaghetti), and pancetta. Seems like a simple enough grocery list, right? Well, I don’t think any trip to the grocery store in Italy is going to be simple.

Finding the pepper and the bucatini was easy enough, but I got stuck when it came to the tomatoes. I even translated “crushed tomatoes” before I left, but I couldn’t find that translation on any can. Eventually, I gave up, grabbed a random tomato can and prayed there would be crushed tomatoes inside.

The final thing I needed to pick up was pancetta. Pancetta is like in an Italian cured bacon, I’ve used it before in various recipes, so I know what it looks like. I decided to test my Italian language skills, so I marched up to the deli counter and waited my turn. I said to the butcher: “cinque slices pancetta,” (I didn’t know the word for slices, okay) I felt very proud of myself except this man picks up finocchiona, not pancetta. I don’t know if he thought I was stupid and wouldn’t be able to tell the difference, and I knew I didn’t pronounce it incorrectly!! I just didn’t say anything because I wasn’t sure if it would’ve been insulting. So, here I am with this meat instead of my pancetta…I was disappointed and frustrated, so I payed and left.

I stopped by Conad to pick up prepackaged pancetta instead. That’s the last time I go up to a deli counter in Italy.

I was too lazy to cook last night, so when I woke up at noon today I decided it was the perfect time to cook!

This recipe was pretty simple to make. Boiling water is probably the most annoying part because it literally takes forever to bubble! I chopped up the *real* pancetta, an onion & garlic, and let that all cook together. When it came time to open the tomatoes I prayed they would be crushed…they were not, but they were close enough. I dumped the tomatoes in, and let the sauce simmer while the pasta cooked.

This meal really did only take 30 minutes to make which only happens once in a blue moon. I happily scooped my pasta into a bowl and attempted to take an appetizing picture, but alas, the lighting in my apartment stinks. At least I tried!

I sat down, and was so ready for this moment of truth. 3…2…1…. ahhh, it’s just a pasta dish — a red sauce pasta dish. I’ve never been a huge fan of red sauce but this wasn’t bad. It had a little heat to it because of the red pepper too. I gladly helped myself to two portions.

Now time for the rating. Bucatini all’Amatriciana receives ♥♥♥♥ (4) hearts. I seemed to be bashing this recipe above, but in all honesty it was good. The tomatoes here are so different than the ones in the US…they’re actually delicious. This red sauce pasta was nothing like I’ve had at home, and it has everything to do with the freshness aspect of all the ingredients. I have enough of this to last me the next week too, so I’m pretty excited to come home and enjoy this every night. It’s unbeatable.

Though being alone in a foreign city with absolutely no friends this weekend was kind of intimidating, it was a much needed break to focus on myself. Nothing relieves stress quite like cooking while blasting Kesha’s new album. Really, although I preach cooking with friends, cooking by yourself just may be the medicine you need sometimes.