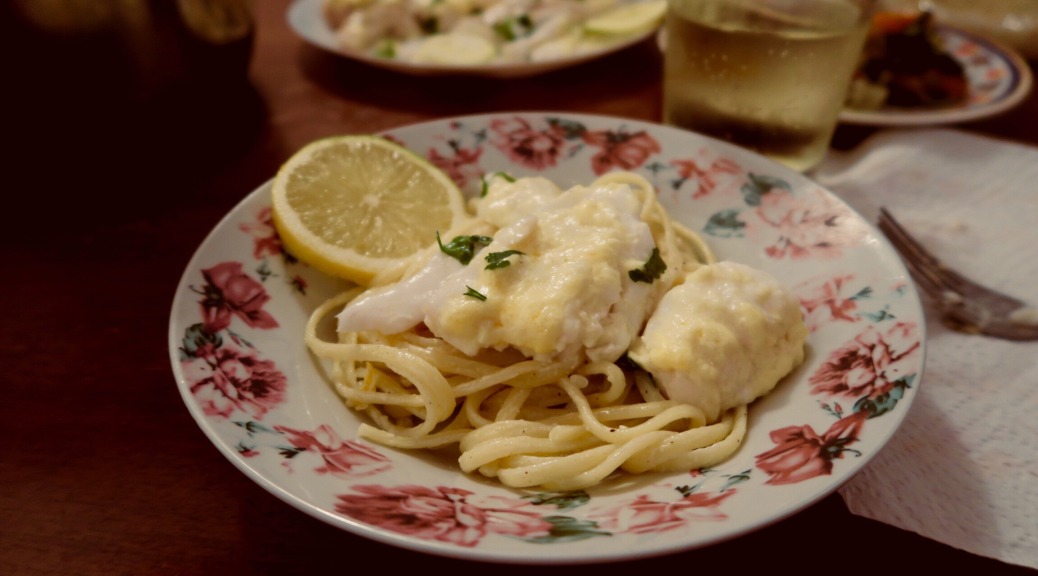 I can’t believe it’s already that time of year where it is 100% acceptable to eat double your body weight in turkey, stuffing, and mashed potatoes. Really, Thanksgiving is such an underrated holiday — and when I say underrated I’m talking about all those people who go straight from Halloween to Christmas (screw you) — But I also mean underrated because it is just now hitting me that I won’t be eating all of those age old delicacies since I am still in Florence. I figured I’d still cook this holiday, even if it wasn’t Thanksgiving food. So for my mini Friendsgiving day feast I decided to make it into an evoo extravaganza by making Broiled Cod and Amalfi-Coast Lemon Linguini. Let’s get cooking!

This grocery adventure started at the Central Market. After a weird fish experience at Conad, I knew that I had to go to a *trusted* place for fresh fish. Stef and I wandered through the market looking for the fish vendors who sold cod, or merluzzo in Italian. I was a little apprehensive to ask the vendor for it, because I was afraid I wouldn’t ask for the correct thing when I spoke Italian. I managed to choke out “Un kilo merluzzo.” The vendor happily weighed out my fish, and even gave me a one euro discount. Feeling accomplished was an understatement — I was ecstatic that I managed to order my fish in Italian. That was my first win of the day.

Next we marched over to Conad for the other ingredients. I was that annoying vlogger on this food adventure because I needed to film something for my youtube channel. So, we went around the store filming my ingredients and what not. I was pumped because I found every single ingredient at Conad, and to make it even better, the total was only 10 euros! Happy thanksgiving to me!!! I went home exceptionally satisfied with today’s shopping experience.

Fast forward to around 6pm. I decided to start the cooking prep a little bit before everyone arrived. My first task was to prepare the fish fillets. When I unboxed my cod, I realized that the vendor gave me the big hunk with the whole spine still in the fish. I had no idea how to debone a fish, and it was near impossible for me to do. I basically went full barbarian on the fish attempting to make edible fillets from it. I think I did a decent job, but after a while I simply gave up. I was the only one eating the fish anyways, so its not like I needed a large amount.

Claire arrived as I was seasoning the fish with butter and mayo.

We both diligently worked in the kitchen. I took care of the lemon sauce, while she sautéed a hodgepodge of vegetables. I was a little nervous that the lemon sauce would be too lemon-y since the recipe called for the juice of 4 lemons and the zest of 3, but as always I try not to question Rachel Ray.

This meal really did only take 30 minutes to make! The pasta was ready in a jiffy, and the fish was cooked through in 6 minutes. Ashley arrived with the wine just as I was setting the table.

After a long day, or should I say week of working on homework, we were so excited for the first relaxing bit of our day: The moment of truth. 3..2..1…Hold up. Can I redo this moment of truth over and over again? This pasta was literally out of this world! All of us were speechless. I love lemons, but this took the fruit to a whole new level. The cod was also a perfect complement to this pasta. I made a full kilo of linguini, and the three of us powered through the pot like it was nothing. Absolutely freaking amazing.

Saoirse arrived about an hour later, and we really had to hold ourselves back from devouring all of the pasta. I know she was thankful that we restrained ourselves.

Now time for the rating. without a doubt the Broiled Cod and Amalfi-Coast Lemon Linguini receives ♥♥♥♥♥ (5) hearts, but in reality it broke my scale. I dare to say that this pasta dish may have been the BEST pasta I’ve had since being in Italy. I know that if I made this in the US there would have been a dramatic difference — Italy is known for their lemons, and the US just doesn’t even compete in the lemon department. I need to try a restaurant’s lemon pasta now to see how it compares….but either way lemon pasta is now my favorite type of pasta in the world!

I’m totally okay with the fact that I didn’t have a traditional Thanksgiving this year. Although it was weird at first, it ended up being one of the best Thanksgivings ever. I learned a very valuable life lesson today: When life gives you lemons, make lemon pasta!